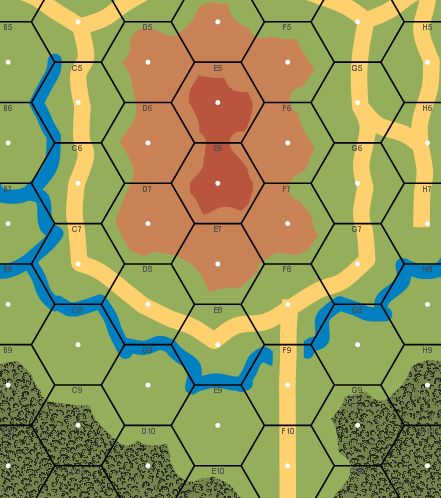 As the response is positiv all in all, I start working on the 1.1 update Version.
Today I realised an idea by Ian Wedge. With the 'Random factor ' Roads and Hexsides can be drawn more easily.
I am still looking for a MAC, and did some research about Mono. Generally I hope a MAC version could be realized.
Download the Trial Version at…
Continue

Yesterday evening, on our way back from Recruits Con, I stopped off at TableTop Game & Hobby in Overland Park, KS. There's a hot wire foam cutter there I've been looking at for quite awhile. But I have not yet been able to bring myself to forking over the bucks for it.

Then I got to thinking, how hard would it be to make something like that from scratch? My Navy career started out… Continue

Our World in Flames game is slowly advancing through 1944. Winter has finished and the first shiny spring impulses are starting to arrive. My vaunted Wehrmacht has survived this feared winter in quite good shape. The Allied advance in France has been frustrated by bad weather and those stinky coallition forces are still bottled in Brittany, although I'm afraid a withdrawal to the Seine will be advisable soon. To break the stalemate in France, the Allies have landed north and south of Lisbon… Continue

For all those that don't know (and that's most of you, heh), I am designing a game similar to Campaign to Stalingrad in scope, but using a modified version of Nathan's Iron Tide (Op Typhoon/VitW) system. I'm having a playtest and game day at my house as our normal meet has pretty much fragmented with no place to go. I will be opening a folder on CSW soon for discussion as things progress.

I posted this over on CSW in our local folder and thought I'd blog it over here,… Continue

Well, I replayed Cortes with the Aztecs using the "Northern smash" plan which involves massing most of the Aztec knight units against the Northern Spanish force and true to expectations, the Spanish got severely mauled before the Spanish fleet could make it over to the that side of the lake and provide fire support. But it was a close-run thing.

Beware of "Army of Two"

Easter holidays - this means 4 days of gaming and relaxing!

Andreas Ludwig and I decided to spend this year's Easter mainly with three different activities:

1) Playing Empire of the Sun (GMT). You can read the report about the disastrous defeat of my US forces in the CSW Empire of the Sun Group in the topic "Japanese Easter Blitzkrieg" ;)
2) (Re-)watching Peter Jackson's Lord of the Ring Extended DVDs for the 6th or 7th time since release...
3) Playing the… Continue

Marc Guenette and I reached the end of turn 10 last night, and we'll be calling the game here as a Soviet victory. 3 VPs already in the bag - 2 for the Luftwaffe and support units (Grossgewitter "lite"), 1 for 50+ steps.

Get the Trial Version at :
http://www.hexdraw.com/HexDrawSetup.exe

Installation is easy. just start HexDrawSetup.exe
Its possible the setup downloads a needed file from Microsoft.

OK, this one is for the miniatures gamers, of which I'm occassionaly one. Like many things, this is just an opinion and I'm sure there are plenty of fanboys out there ready to light up their torches and grab their pitchforks but so what. You don't like it, move on. Now for the rest of you...

For some time, the issue of poor miniatures rules sets has been bothering me. Maybe it's just me (and if so, tough!) but it seems that the average miniatures rule set is a much poorer product… Continue This last weekend, I dug deep in the Cave of Unplayed Games and pulled out Cortes. This gem was orignally published in 1993 in Command Magazine, Issue No. 20 and it offers an interesting game of a topic that nobody (to my knowledge) had touched before.

The game system is interesting, the graphics superb, interesting rules and "chrome" to include temple desecration and human scarfice. What's not to love? Well, I played it (or rather,… Continue I have been reluctant to post about this until I had some solid game design work completed for this project, but since I have no idea how long that will take, I figured I would at least throw this teaser out there.

So what is the Open Wargaming Initiative? Well, imagine a wargame system designed from the start to be open-ended and extensible. But more importantly, a wargame system that nobody "owns", or rather, we all own it together. Like Linux, the system and all its materials… Continue This is a play-session of the upcoming game (Ici, c'est la France!) on the Algerian war 1954-62 which will be published by Khyber Pass Games. It is winter 1955 and the few fellaghas there are consist of some moussebilines (auxilliaries) in the Kabylie mountains, close to the town of Tizi Ouzou, and in the Aurès mountains outside the town of Batna where there also are some better armed moudjahidines. The French repression after the initial… Continue

Tell Us More About Yourself!

In order to facilitate networking and finding common interests amongst members, I've expanded the member profile section with more questions you can now answer (this was a feature request of mine since the previous limit was 3 questions maximum). I think it's important that we can become more familiar with others on our network...so please let me know if there are any other profile questions you would like to see added. For… Continue

I last left off the description of my current gaming with my FTF activities....

Besides the weekly game night with Trevor (Did I mention that I think he is one of the only the few, besides James Pei, to have won the WBC "For The People" Tournament? Don't even ask how that game went when we played it :-/" ) I belong to Metro Seattle Gamers located guess where? Seattle! - I live and work in Kent - about 20 minutes (on a good… Continue

Current state of (my) gaming (in)activities

Where to start a blog post on my activities? How about what I'm doing (or supposed to be doing) right now and see where it goes.

I have many gaming interests and not near enough time to game; so what am I going to do about it? Quit my job? No. Go fire up ADC, VASL, or Cyberboard and process one of my long dormant PBeM games? No. Read some rules to games I've purchased but not played? No. I'll tell you what I'm going to do! I'm going to spend my free… Continue just toying around,
the craters are a verry good texture,
only seconds to do this...
what terrain is needed in a space map ?

Uploaded the picture to photos

todays work:
tested instalation
open picture dialog shows thumbnails (some hardcore programming)
Border on /off
starting Hexnumbers at -1
Manual is back from… Continue OK, it's Friday and time for yet another bad Star Trek episode. Today's "gem" is the "Omega Glory" which features one of Kirk's collegues violating the Prime Directive and one of those "oh-so-original" plots involving parallel development ("Yangs" vs "Kohms") which are usually just a way to save money and be able to utilize Paramount Studios' extensive prop and wardrobe collections without having to… Continue

Father vs. son at Arnhem

Well...finally I pulled it off. My first win in a long time against my son. My son normally has an exceptional luck with both cards and dices in this game but this time it went my way, eventhough it was close. I play Memoir alot with my son and we have great fun. I do remove some of the "grey"cards wich have to much english text since he cant read english yet. But he knows the function of most "grey" cards.