The Inkscape Boardgames Extensions are now at version 0.89. The new version adds better support for specifying exact size of the hexgrid hexagons. I found it a bit too tricky with the old version to create symmetric hexagons, but using one of the new "hex size" or "symmetric hexes" options will make sure all hexagons are of the dimensions you want. That should probably have been the default since the first version, yes... There are also a few bugfixes for some obscure combinations of hexmap options that caused some extra lines to appear sometimes (hey, with all those possible settings for how to create the hexgrid it is not easy to test them all).

A good thing is that Inkscape 0.46 has now been officially released. That should make it a lot easier for Windows users to use these extensions.

Plan for 0.9 are support for making countersheets match a given layout template (ie to match the layout of your die, if you are one of those lucky guys with your own diecutter; this will be done WYSIWYG style by drawing rectangles directly in the document to specify where each block of counters should go). I also think I will remove the hex coordinate text settings, as this was impossible to get right anyway and is so easy to manually adjust anyway. I'm thinking of just calculating some default font size and text position from the hex height instead. 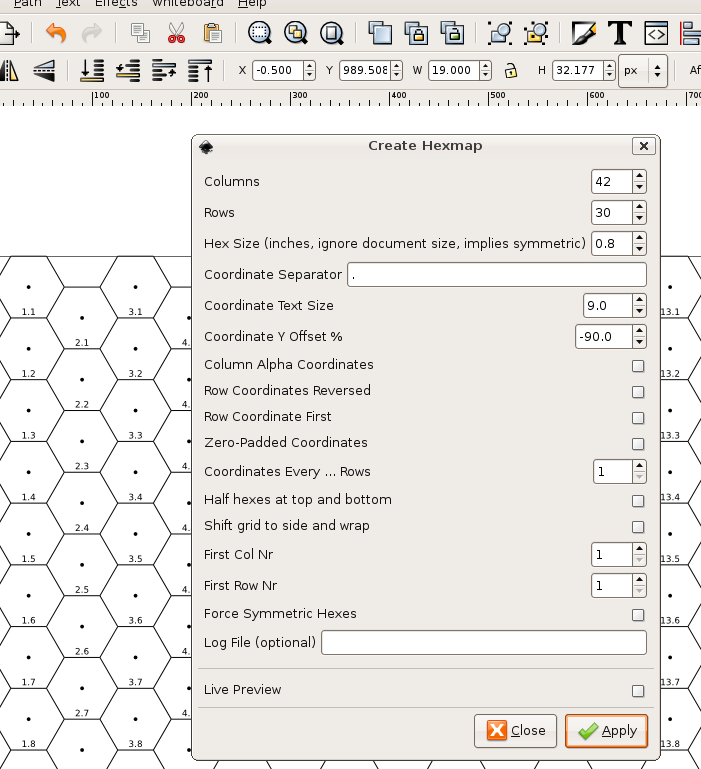 Comment by Steve Dixon on April 5, 2008 at 7:55pm
Any possiblity of doing this as a plugin/template for OpenOffice (www.openoffice.org) ?