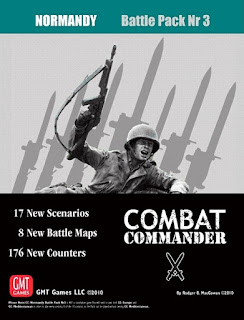 Managed to wangle an evening off and so an unscheduled outing to my Dads for couple more Combat Commander gameplay.
Played a couple from my newly acquired Normandy battle pack.
First up was 'New Highlanders' set around Authie with me as Canadians against Dad with 12th SS Hitler Jugend.
Canucks in Recon posture with SS attacking. Both Elite types but with SS having better firepower and support of some nasty 150mm Artillery.
This one proved to be a very close run thing for the Canucks indeed with them down to a single VP point when luckily the game ended on first Sudden Death roll !!
If SS can get into Melee they are very tough hombres especially with a decent leader in tow.
Second scenario was another Canadian vs SS affair 'Graveyard of the Gordons' (I think ?) with Canucks attacking dug-in HJ at Capriquet airfield.
Canadians have superiority in numbers but they have to cross cornfields against the SS who have Trenches and support from 81mm Mortar Battery.
I managed to sweep Hun from right hand side of board but failed to give them any similar grief on my left.
Second Sudden Death roll ended this one in SS favour (we seem to be trading honours evenly in these scenarios).
This one had lots of incidents and events with both sides gaining Heroes and Canucks getting a 140mm Battery support which failed to hurt SS but suppressed and broke several Canucks with one wayward (ie short) barrage !!
Great stuff once more with this hugely enjoyable game and whilst battle pack adds a couple of special rules (only one we encountered was Scouts who are essentially Observers for on board Mortars) there is but nothing sizeable or overly complex.
Some of the D-Day type scenarios look very interesting. 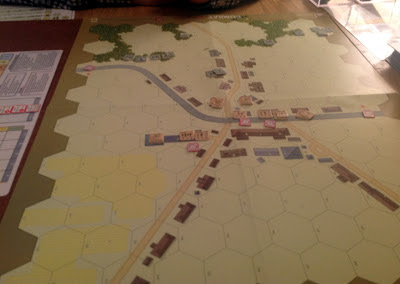 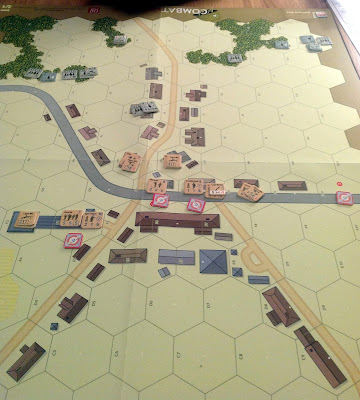 Now getting downright rude coming into our billets ! 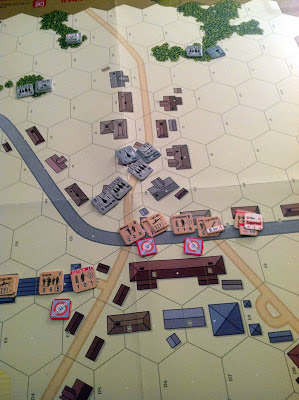 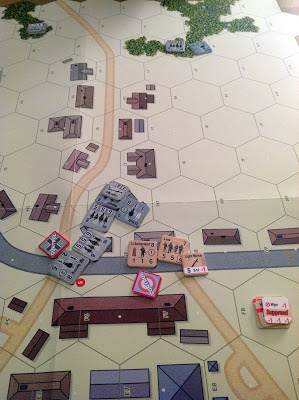 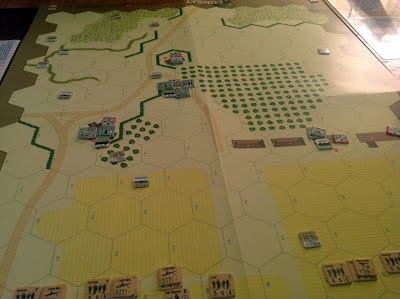 Canadians arrayed against them in the corn 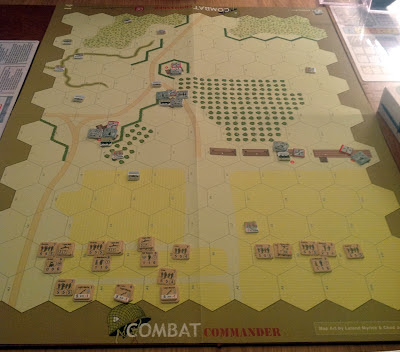 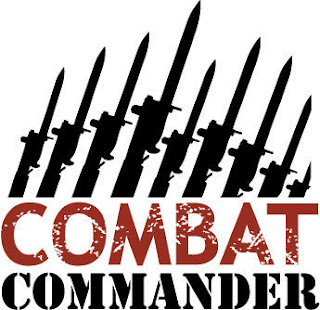 Cool. I checked out (and bookmarked) GMT's website; they had several videos for CC, including examples of online play. I owned Up Front! and Banzai! back in the day, and this certainly seems to have that kind of vibe. The card mechanics allow for that age-old dictum about the best laid plans not surviving first contact with the enemy. They also allow the underdog in a scenario to ocassionally bite back with big teeth! The many expansion packs (one of the things I loved about ASL) are a big plus (having served in the US Marines, CC: Pacific is already calling to me...). I'm awaiting the arrival of Der Weltkrieg: The Italian Front and Custer's Final Campaign from Decision Games, my first new wargame purchases in many years. Once I've got those digested, you've got me sold on CC for my next purchase; I can see myself picking up the entire series over time. Thanks for the feedback, Gary!

Comment by Gary Barr on January 27, 2013 at 4:25am
If ASL is a 10 for complexity I would place CC as a 5 at most. It plays as a sort of mix of Squad Leader and Up Front. Being totally Infantrycentric (ie no vehicles at all) removes a huge part of ASLs complexity of course.
Like Up Front (an 8 for complexity) the system is driven by cards (including your dice rolls).
This generates biggest difference between ASL in that no set phases per turn such as Prep Fire etc and limits ability of your force to act or react by cards in your hand. I can see how this can/will frustrate players used to more predicable play but personally (whilst I loved original SL) I adore these sort of 'chaos/narrative' type systems. I find the game just plain fun. I think there are several videos etc at BGG that might show you game in action ?

Heh, looks like old Vic Morrow as Sgt. Saunders (I loved 'Combat!' when I was a young boy)! How does this play, Gary? The map and counters look slightly ASL-ish. Is it the same level of complexity, or are the rules a little more user-friendly? I enjoyed ASL, but it got to be more of an investment of time and brain cells than I could keep up with, along with my many other interests... I think ASL requires frequent play time for one to remain proficient; it got to be too much of a grind re-visiting the rule books whenever I got it on the table. That being said, I really prefer this level of game for World War II. I may have to check this series out...