First scenario was proposed by another of the club members, Jordi "Dulent", and it was Scenario 111 "The Scheldt" published in C3i # 24.

This scenario reflects a meeting encounter between Canadians and Germans in Belgium and its is played using Map 20. Here is the initial set-up. 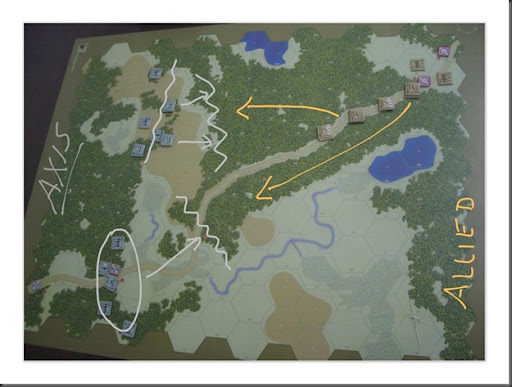 Both sides deploy 5-hex deep. Main objective is number 3, just in the middle bottom (close to a white arrow). However, two  extra objectives  need to be drawn and one of them was Objective # 5=10 VP. In this map, Obj 5 is in the bottom left corner of the map (axis side), so allied will have a really hard task to win the scenario.

As you will see, even in both sides are at Recon posture, Axis proposed a quite defensive position letting Allied all the responsability for the attack. Axis deployed in two groups, one to guard the road and the other the forest (no hills in this scenario), hoping to jump into Obj 3 as soon as possible with covering fire from his HMG (placed at Obj 4). Allied, feeling that the only way to have any chance was to break german position in the forest and run out of the map, concentrated all his efforts in the road.

Germans moved their defense lines up without problems and waited for canadians to arrive into melee.

Canadians went directly towards German leader, to force into melee and trying to let left German side without command. But, all the melees in the scenario were won by Axis player (a lucky day) and even when the second canadian wave arrived, German succeed to carry his second supporting team into the battle.

Finally, Canadians did not succeed to break German lines and this was an easy Axis victory (determined by the initial draw of the random objectives). Final situation: 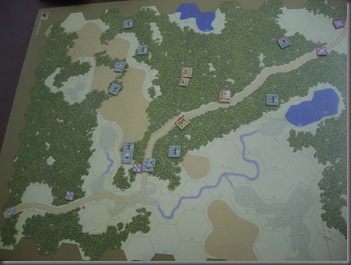 As this was a really short scenario, we have enough time to play a secon one in the same afternoon. This time we decide to play Scenario 54 from Normandy Battlepack.

Again random objectives should be taken and in this scenario we have seen as exit  value points are doubled. Thus, French (me) has a difficult choice for defense. This was the chosen setup: 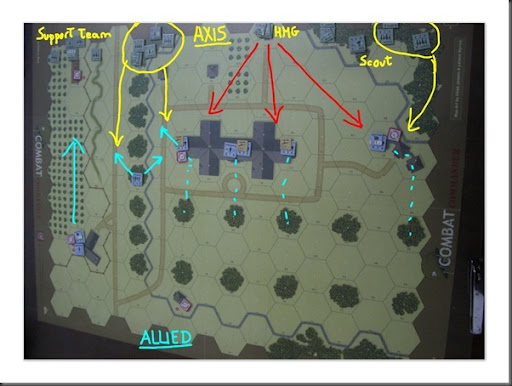 In this scenario German forces are of low quality (conscript are 6-morale unbroken and an difficult to manage 5-morale when broken) but they have four leaders and HMG and a good Medium Mortar with a Scout. So German place his HMG to enable supressing fire into the Castle and the right house. Then, mortar was in the left house but with the scout in the opposite side to cover terrain. And the main assault group was placed in the line of the two roads waiting to advance towards French lines.

With this deploy, French decided to go into the castle, hoping that the building will provide enough cover to delay German advance. His main strategy was to exchange terrain for time, trying to provoke fire and exhausting cards. The houses at both sides were guarded by squads with satchel charges to protect Germans to come easily into melee. SAS command was in the line of brushes, ready to stop any of the two roads. I have designed dotted lines to represent the "fall back" routes planned by French in case of succesful german advance.

To help French, radio represents American air support so we will expect a lot of Artillery Request/Denied cards played in this scenario.

So, after this fighting the situation was the following and both sides planned to rearrange their forces:

Almost everything seemed lost for French. HMG take position in the brush, only one squad to stop the advance in the right, melee fighting in the left brushes ... 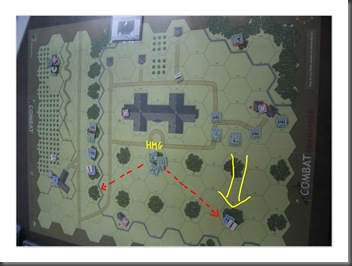 ... and, in other fire German order, a Time trigger was drawn and time marker advances. Sudden Death was 6 and German will roll for the end of the game (with Allied leading by 4 VP). But he rolled an 8 and battle will continue.

And Germans rolled a 9 (they had Initiative card from a prior exchange at melee), keeping the fight alive, exiting the map and winning the funny scenario.

Final situation and casualty track. Ironically, battle ended by surrender of French and no by sudden death.

Incredibly funny scenario, we will play it again in the near future.

Otto Harkaman commented on brian s. b.'s group zun tzu
"Deleted an earlier comment, wanted to rephrase it. Reading earlier posts I am just amazed how you…"
2 hours ago

Otto Harkaman commented on Chuck S.'s group All things SPI
"Thanks Christian, yes I will probably post here, I gave up on FB years ago."
4 hours ago

Christian A. Strasser commented on Chuck S.'s group All things SPI
"Definitely alert them on FB, but post here as well, since it'll be easier to find :) "
11 hours ago

Steven Rugge commented on brian s. b.'s group zun tzu
"Thanks for doing this Otto.  A friend of mine has been asking for just such a document so he…"
12 hours ago

Otto Harkaman commented on brian s. b.'s group zun tzu
"Got a rough version of my ZunTzu notes together. Often I had just copied and pasted questions to…"
12 hours ago