Last session, Ramon and I were giving a try to the biggest and bloodiest scenario in Combat Commander. We have played Scenario 40, Into the Breach, that deals with the fighting at Barrikady Factory in Stalingrad.
Scenario is played in Map 34, mainly dominated by a big building (Barrikady Factory) withother factories in the surroundings. Set-up is quite original as both players must draw for a random hex where to place groups in an alternating order. Rubble hexes are also placed at random at the beginning of set-up. This is the result of our random draw: 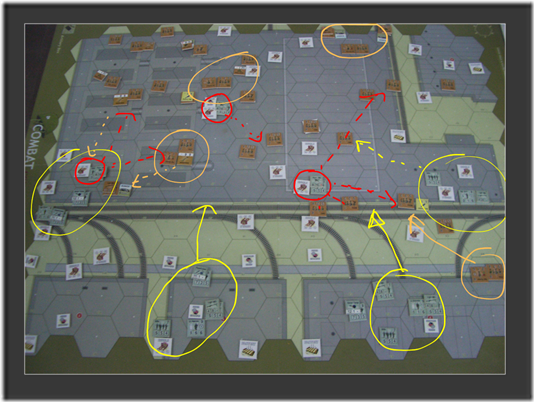 The Germans (me) are mainly placed in the factories of their side but a few groups have achieved to deploy inside the factory. Interestingly the three German HMG (red circles) are inside the factory and I placed them into rubble hexes looking for machinegun nests (fields of fire indicated by red arrows). I was also fortunate as I've managed to have most of the other squads well grouped and mostly (just but one) into command radius of any leader (yellow circles).
On their side, Rusians are spreading inside the factory. A few units are placed in other factories. Infantry guns are back in the first row of the map with difficult lines of sight. Also there are many units out of command in the middle of the factory. German leaders are indicated by orange circles.
An important rule in this scenario is that factory has an inherent hindrance of 3. Victory conditions stablished that Germans should look for having more units than russians inside Barrikade or for exit units off the map.
So first plan for Germans was to eliminate Russians units that could interfere movement inside the factory. With the HMG I have tried to break as many russian units as possible to facilitate the advance of my backwards groups.

This is the overview of the battle at this point. Without opposing fire, German decide that it is time to move his two remaining groups into the factory. 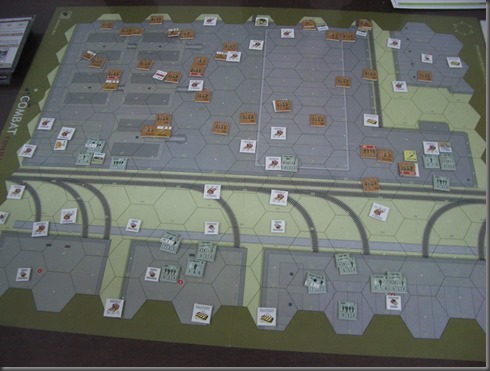 At this point, Sturm reinforcements arrived and German player decided to deploy them in two groups, left, and right to support main assault into the factory.

Now, German is heavily placed into the factory and, in the view of German Flamethrowers, Russian commander panicked and gave order to stablish a new defensive position back in the factory. 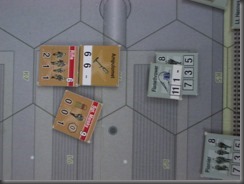 However, unstopped outside of the factory, now it seems to late to avoid the enormous push of Germans. Moreover, russians get outflanked in his left (right in the pics) and Germans have found a freeway to get units off the map, directly towards the Volga!!! 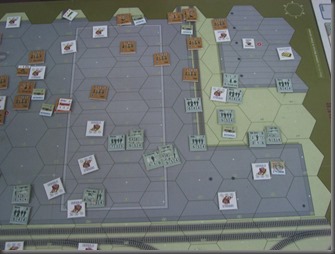 At this point of the fight, it was late in the afternoon and we have agreed to stop the scenario. Russians were still leading by two VPs and had 1 more unit inside the factory but probably it would end in a German victory. Nevertheless, we friendly accord a stalemate.

This is the final position:

My impression is that this is a way too big to play with CC. I prefer scenarios with a smaller number of units. Initial set-up is original and funny and gives a lot of reproducility to the scenario but it consumed too much of our playing time (total session was less than 3 hours).

Otto Harkaman commented on brian s. b.'s group zun tzu
"Deleted an earlier comment, wanted to rephrase it. Reading earlier posts I am just amazed how you…"
2 hours ago

Otto Harkaman commented on Chuck S.'s group All things SPI
"Thanks Christian, yes I will probably post here, I gave up on FB years ago."
5 hours ago

Christian A. Strasser commented on Chuck S.'s group All things SPI
"Definitely alert them on FB, but post here as well, since it'll be easier to find :) "
11 hours ago

Steven Rugge commented on brian s. b.'s group zun tzu
"Thanks for doing this Otto.  A friend of mine has been asking for just such a document so he…"
12 hours ago

Otto Harkaman commented on brian s. b.'s group zun tzu
"Got a rough version of my ZunTzu notes together. Often I had just copied and pasted questions to…"
12 hours ago