More pictures can be found at

Last session we have played this scenario from  Normandy Battlepack. Axis setups first and then Allied must place his Airborne units adjacent to the landing hexes. 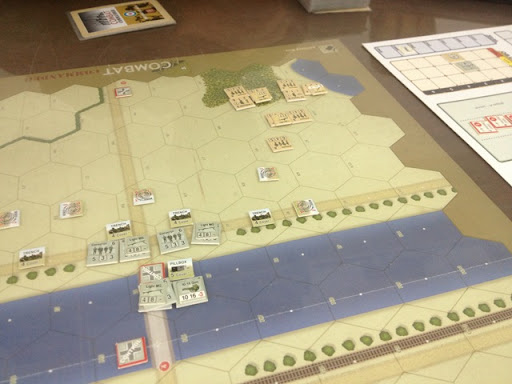 At first glance, Allied strategy is straightforward. Run as fast as possible to rout the low-quality Axis units (Green teams and Conscript squads) guarding the bridge before German reinforcements arrive (Rifle and Volksgrenadier squads). Both sides are in Recon posture but the special rules established that any discard involves the whole card hand. Also we are at night and there is an inherent hindrance that increases with distance to target.

Initial Allied hand is almost perfect. Fire and recover as orders and Spray fire and assault fire could made a devastating initial turn menacing to capture the bridge. It is a pity that British can not move!!! Probably they are still disorganized after the landing and need some time to prepare the assault.

But the Germans are not much better as they do not have any fire order and must wait seeing how Allied will advance on their proximity. 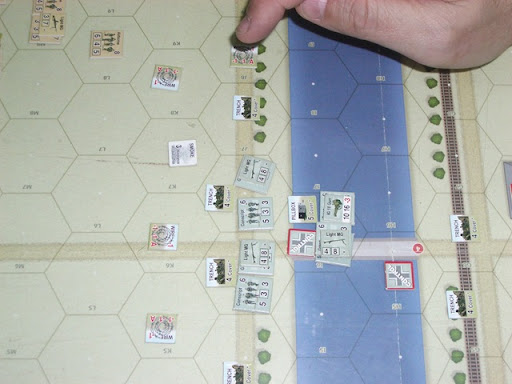 After a few attempts to increase smoke cover and some exchange of firing, finally Airborne got some organization to initiate movement. But Germans were prepared to open fire and stopped the assault almost from the beginning of the operation. Allied were prepared for this incoming fire and all squads but one could recover. But, in the process of recovering several events appeared. One of the very first rolls triggered a Time! event and British was obliged to reshuffle his deck. In the very second card another Time! was triggered. This bring into play the German reinforcements, increase surrender level for Germans and put British close to a humiliating defeat.

Moreover, one of the shells fired from the Infantry Gun exploded too close to the forest and ignited a small fire that rapidly spread into the surrounding area.

With his line of sight completely blocked, the mortar team was forced to relocate their weapon. Using the blaze as cover, Sgt Thornton and one of the squads initiated movement to approach the trenches from the side and divert some fire from the main assault. 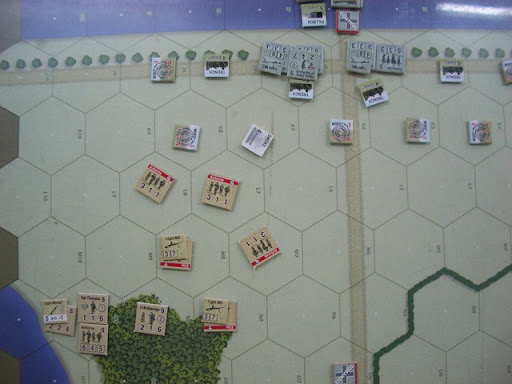 But Germans rapidly reacted and fired a starshell close to the approaching squad was able to, first pinned them in open terrain and then to eliminate the leader and his squad.
With the distraction obtained by their mates, the rest of the airborne achieved suppressing fire against the garrison at the bridge, and the IG turned into silence for a few rounds.
Although most of the units recovered, one of the Green German teams completely panicked and routed until they were stopped by Private Romer who forced them to reintegrate the fight. 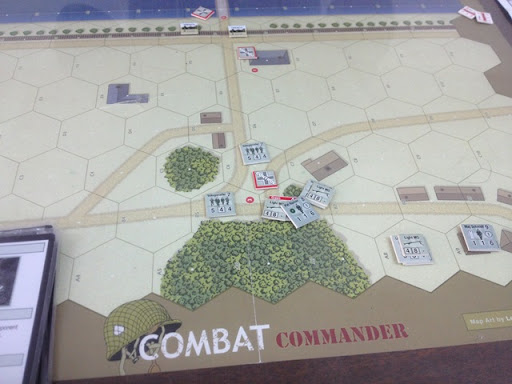 Time is rapidly running and British are still far from their objective so they continued to move. But, again they were stopped by incoming fire. This time, however, the recovery order given by the officer was not followed by the troops. 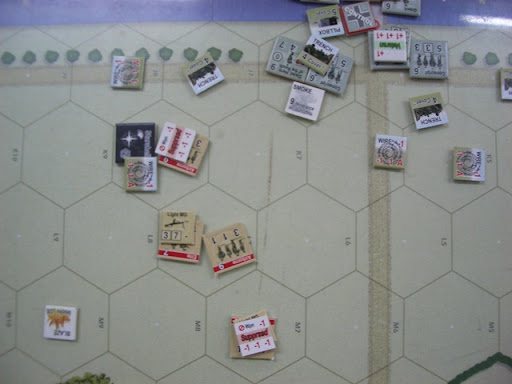 For a few seconds, British leader was stunned by the failed assault and soldiers did not get any recover order.
The heavy fire on the uncovered broken paratroopers was able to eliminate one more unit and to force another one to retreat. 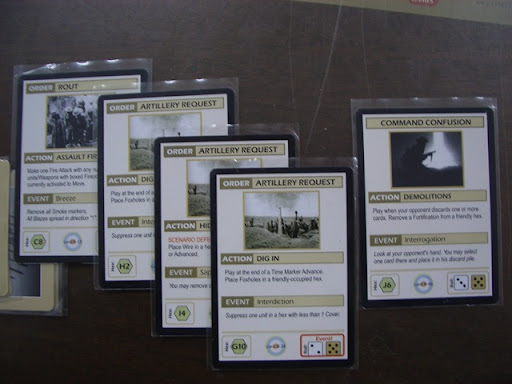 Situation is critical to the British. With the heavy losses inflicted by Germans, remaining Airborne units desperately need that their reinforcements arrive to the area.
And they must survive in open terrain, close to the German trenches!!!
But this is the kind of situations that elite troops are trained for. 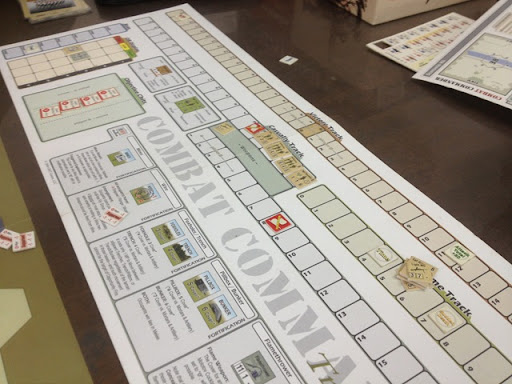 The morale being reinforced by the arrival of their mates, leading Airborne units successfully assaulted the first line of trenches and are at proximity of the bridge. 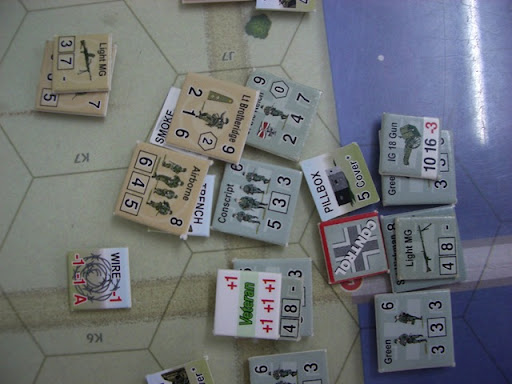 A nice target for the 18 cm Infantry Gun. Even if British are taking positions at the trenches, they are so close in range that the weapon can not miss. Axis gave the order: Fire!!!

And, once more time, a Combat Commander battle surpassed reality. A 1-1 roll and the shot missed the target. 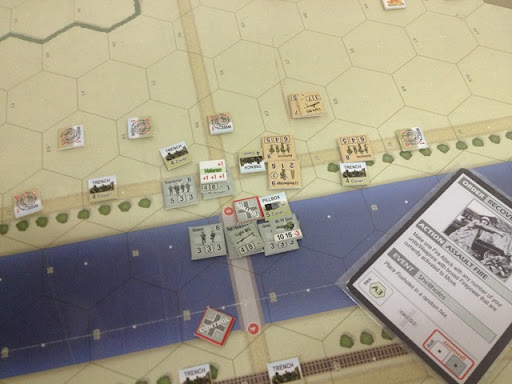 At close ranges, exchanging fire resulted in heroic acts from both sides and a few broken units for the German while reinforcements had difficulties to arrive.
And, incredibly, another miss from the IG, this time being jammed. The following sniper event, destroyed it 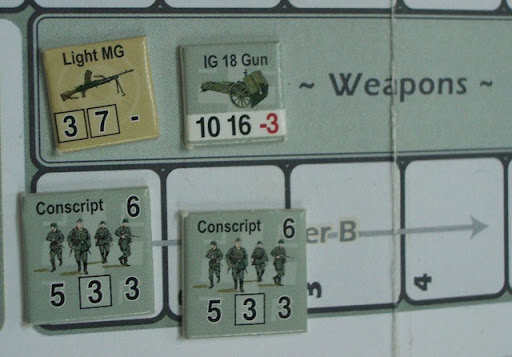 The explosion of the gun encouraged the freshly arriving airborne units that run into the battle. By using assault fire and spray fire several times, British inflicted several casualties to Germans. Successive starshells were place around that bridge that it is now fully enlightened. 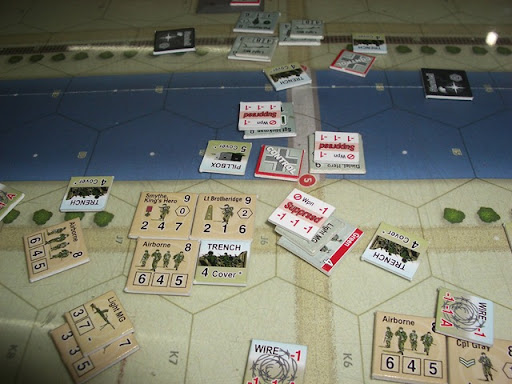 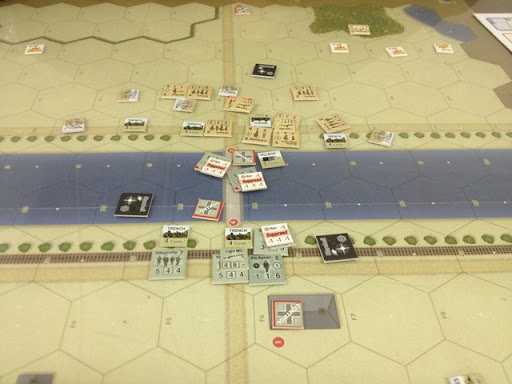 In front of the bridge, British reorganized squads preparing for advance into the German pillbox. Although Axis was clearly leading in Victory Points (+10), a melee into the pillbox could turn the victory into Allied side as Axis was also dangerously approaching his surrender level. Allied did not get any advance Order for several rounds and the battle at the pillbox did not take place.

A Sudden death roll was triggered by German. Allied gave  initiative card for re-rolling. A few go and backs of the initiative card ended when German succeeded to finish the battle and winning by 10 points.

Allied failed to take Pegasus Bridge in time and now, Overlord objectives for the first day will be difficult to achieve. 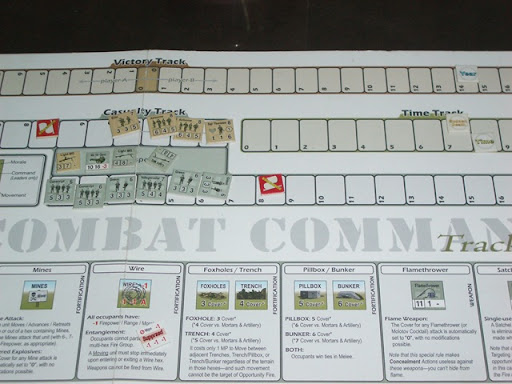 Joseph replied to John Kranz's discussion What are you playing?
"Played: "Sword of Rome" by GMT. Did not finish but all had lots of fun. Playing the new…"
17 hours ago