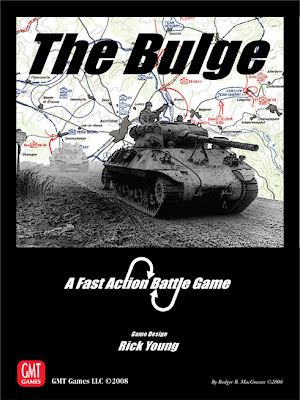 Had a game of Fast Action Battles: The Bulge with my Dad last night (when I should have been touching up the paint job on my Norman type army which I am fielding as Early Medieval French this coming weekend in a Field Of Glory competition here in NI) . A game I have had for several months but not managed to get to table until now.
We both enjoyed the game a lot.
Nice system with the combination of Block units and Assests & Events (counters) combined with standard Bulge scenario.
The terrain problems, and Rollbahn restrictions, nicely rendered for the initially powerful German forces with the pesky US Engineers assests proving their worth with ability to blow bridges and/or build or man roadblocks.
We managed a full seven turns (out of 13) which was pretty good for game and system new to us both with our biggest bug bear being having to flit between core rules and those in the Bulge specific playbook.
We did make a couple of mistakes re Victory Points (counting weak units in error) and Assest draws but we found this out quickly and rectified without too much impact on game.
German tide was quickly stemmed in Northern sector and they had moderate gains in South but they did make significant gains in Central sector taking Bastogne and pushing beyond.
However as we finished Pattons powerfull 3rd Army units were arriving and threatening the German flank.
Another fun game added to the growing list of 'we must try that one again' titles ! 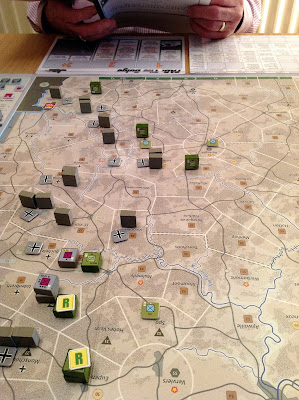 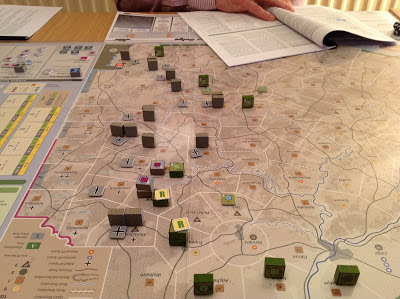 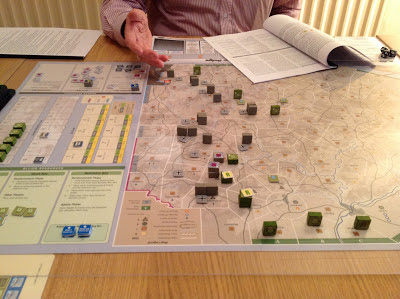