Tom Russell and I have been working together since he designed Blood on the Alma for Line of Fire Magazine. He is a meticulous, aggressive editor, clever game designer, and all around easy guy to work with. I asked him for some designer notes on the Shields and Swords system, the engine that powered both Stamford Bridge and a Hill Near Hastings in Yaah! Magazine issue #1. Here's what I got. A great article. I wouldn't have expected anything less. Thanks!

How Shields &amp; Swords started is that I wanted to work with a certain publisher. It didn't start with an interest in the topic (though I'd always found the Middle Ages to be fascinating) or in a mechanism, but because I looked at the publisher, looked at the kind of stuff they were putting out, and decided that I would design something that fit in their wheelhouse: very simple rules, low counter density, small map. Having decided I was going to do that, only then did I start casting about for a topic. (That probably sounds a little backwards, but I found it's actually a very smart way to get games out there. I had spent years flailing about trying to get publishers interested in my Euro-style designs. Then I decided to build a game specifically for Winsome Games, and finally had some success; I've had one game in each of their famed Essen Sets three years in a row now.) 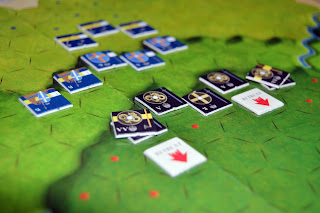 While I was looking for my topic, I saw a short television documentary about the Battles of Hastings and Stamford Bridge. The latter excited my attention, especially as it was relatively obscure. Not being super-confident in my abilities as a designer at that point - this is a few years back, and again, I had never had a game published - the obscurity attracted me. If I did a game on, for example, the Battle of the Bulge, I would wonder if I had anything new and meaningful to say about the battle, since it had been gamed so many times before. With Stamford Bridge, that wasn't really a concern.

I knew it needed a hook, and I settled on the double-sided command chits fairly early on. Linear warfare, especially in this period, is often pretty static and about both sides hitting each other until one of the sides stops hitting the other, which can result in dull games. The command chits give the players something to think about and to do, which livens it up a bit while maintaining the essential nature of the period. And of course these could also be used to represent the differing abilities of the leaders (this was especially true for Stamford Bridge, with its succession of leaders on the Viking side).

Originally, leaders were also represented by their own counters, with the standard-issue command-range shenanigans and plus-one inspiration bonuses you often see in games for this period. I cut it though because, quite frankly, I don't really like command-range shenanigans. While leadership and personal charisma counted for a great deal on the one hand, on the other hand, once the melee started, everyone kinda did their own thing anyway. And so I decided to represent leadership solely through the command chit mechanism. (When I retooled the system this year in anticipation of the first boxed game in the series, I added a rough form of command-control with the formal division of all armies into Wings, and the introduction of rules for Wing Integrity. But I'm getting ahead of myself.)

I pitched the game to the intended publisher in 2011. The publisher played it, loved it, and said yes, slotting it in his development queue. While I waited, I started working on the natural sequel, Hastings, introducing archers and cavalry to the mix, along with the requisite command chits. I started working on some other battles of the period as well, so that if the system took off, I would be ready to hit the ground running. I eased up in 2012 to design some titles for another publisher, and waited patiently for Stamford Bridge to work its way through the queue.

By the end of that year, it was still no closer to getting published. It turns out that I was not the only designer who wanted to work with that publisher, and that they had a famously long queue. When I became editor of Yaah! magazine, and we needed a fully developed and tested game with a small footprint for our premiere ish, I asked the publisher if I could have the game back, and they agreed.

Just as we were getting everything put together for that legendary debut, Mark pointed out that a game with 45 counters wasn't terribly cost effective, since we would be paying the printer for 88. So I dug up my Hastings game to fill out the rest of the sheet, and our first ish was a twofer.

The response to the games was fairly positive, and Mark, being a big fan of both the system and Vikings, asked me if I could do a boxed game about Viking battles. Well, yes; yes, I could. The result,Thor's Hammer: The Viking Conquests, should be announced publicly soon (though I guess I'm announcing it now, aren't I?). (Mark's note: Before Thor's Hammer we have another game to announce and that will come very soon. Maybe this week.)In designing that game, I made some minor tweaks to the overall system. After all, I had designed it four years prior; surely I'd have changed my mind about something in all that time. Chief among these changes was the division of armies into color-coded wings (usually two apiece), a simpler fire resolution system, and the inclusion of Double Counter possibilities for all the command chits. Previously, there was just Double Move and Double Combat, but now there's a Double for Withdraw (formerly Retreat), Shield Wall, Fire, and Horse Phases. I just wanted to add a wee bit more depth to the system, without making it tedious or moving it too far away from its low-complexity roots. I think I succeeded. The new Series Rules, version 1.2, with appropriate retrofitting for Stamford Bridge and Hastings, should be available here. 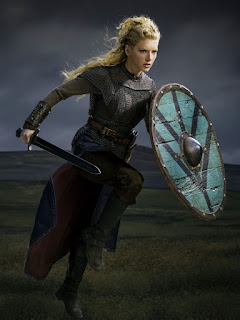 Before Thor's Hammer hits your table, however, there's another S&amp;S game coming out. I don't think I'm allowed to announce the publisher just yet, but I can tell you it's about the Battle of Agincourt. Now, 1415 is a whole lot different than the ninth through eleventh centuries covered in the other games. The base S&amp;S system does a decent job I think of capturing the early Middle Ages, but would be rubbish for later periods. And so this necessitated an adaption of the system to better reflect the tactics of the period. So, in an odd twist of fate, the first S&amp;S game to be released after the 1.2 iteration of the series rules is one that's not compatible with those rules. The Agincourt game started, incidentally, in much the same way the first game did; I saw a publisher, I wanted to design something for them, and so I created something that would fit in their wheelhouse.

What can I say? It seems to work out okay for me.

Eric Walters replied to John Kranz's discussion What are you playing?
"Have got AVALANCHE: THE SALERNO LANDINGS by GDW on the wargame table and have it--at last--set up.…"
19 hours ago

Joseph replied to John Kranz's discussion What are you playing?
"Played: S&T 324, "After the Fall". Two Battles on the last years of the Western Roman…"
20 hours ago

Stephen A Fliss left a comment for Eric Walters
"Thanks Eric!"
21 hours ago