They are Beavis and Butt-head. 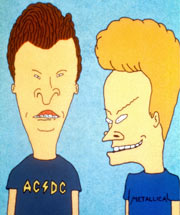 They are idiots.  Total morons.  Their brains are in their 'nads, and their 'nads are small.  They make this guy look like Stephen Bloody Hawking.

The are coming back, probably on lame bikes, as who would trust either with a driver's license?  MTV announced that this summer, they will air new episodes of their show.  That is most welcome, because MTV sucks, and this will help them suck less, even if they still won't play any metal videos.

And life will be more cool.

Comment by Lisa Scheer on February 16, 2011 at 9:10am
I want teepee for my bunghole!!! Hehehehehehehehe

Comment by Roger Morley on February 16, 2011 at 4:00am
I would have to disagree, it will make MTV suck even more, even though I thought they could not get any worse. I find programmes like B&Bh and South Park beyond the realms of stupidity

Now that 14 new episodes have been produced, it will be interesting to see how this MTV generation will react to it

hmm...good question, after South Park can B&B shock anyone anymore?

For fans of Command and Colors Ancients
yesterday
11 Comments

A place for fans of this fantastic ADG game.
yesterday
3 Comments