No Peace Without Spain another year 1706 completed (Vassal Pbem game) 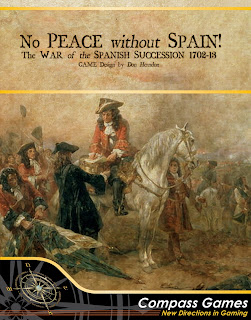 Just finished 1706 turn of my ongoing game versus Norman and what a year it was !!!
Things started on the up for Allies with Savoy changing sides but sadly no VP for newly 'acquired' Forts.
Both sides then built up forces and placed reserves and yet again the Toulon Fleet was launched at full strength to contest the Med (can't fault the French for trying)
Eugene also came back into play at Vienna to scare off looming Bourbon armies nearby.
Hostilities opened with Eugene attacking French at Linz (who failed to be re-inforced by the Elector) and gave French a bloody nose but got a black eye ( 8 vs 6 dice and 3 vs 2 hits inflicted) but allowed him to be-siege Linz.
Marlborough then went unto breach again at Namur this time bypassing lines easily. Lilly livered French retired before him leaving a Garrison to hold this 2 strength Fortress (ie a tough nut to crack).
Both sides then moved to conduct sieges across the theatre of war. French took Mantua and more appalingly two Forts in Portugal one of which was Lisbon (-3 VPs) !! the Portuguese contingent in some danger now. Galway took Tournai after a struggle but the Duke failed to capture Namur again grrrrrrrrrrrr
Year ended on slight upbeat note for Allies as the Toulon fleet was sunk again and the Hapsburg Spainish Uprising took place gaining cause 4 more Forts (again sadly no VP) and a Corps.
However the VP level is a frighteningly low 4VPs  (if at 0 its auto Bourbon win) some small way of the 30 they need.
Marlborough under performed once again and only Eugene and Galway came away with any Honour this year. French strong still in Austria and gaining in Iberian Peninnsula. Looks like Flanders/Southern Germany   only hope for Allies and Lord help them when British Withdrawl occurs in 1710.

Great game with so many decisions to make each turn/phase. Just cannot act everywhere and any upset (such as Dukes failures) have long term effects. Fort and cities changed hands like nobody's business this year. No more reserves for either side so both now at near maximum deployment although plenty of half strength Corps to build up (at least potentially).

Overall situation at end of 1706 (note the VP marker position !!) 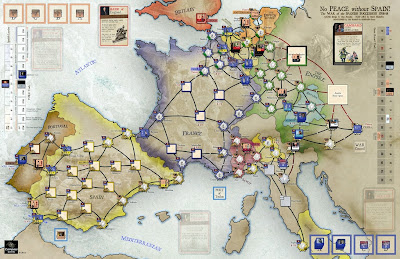 This is my tun-based game 'Second Front' for PC and Mc. It is showing tactical WW2 actions of…See More
Jan 16
16 Comments