No Peace Without Spain another year completed (Vassal Pbem game) 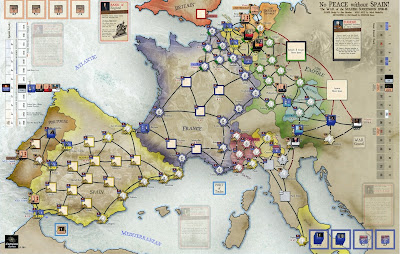 Just finished another year of my Vassal debut against Norman with this fascinating game. A year of fluctuating fortunes for the Allied cause. Bourbons started year with a mean event card which sent Eugene off to the War Council for a year (ie he sits off-board -unless Vienna attacked) Sods also stole initiative this year getting to play first on Campaign phase. Lots of maneuvering in Hapsburg territories with French capturing a couple of Fortresses rather easily and cutting supply to the Austrian force (now sans Eugene) at Trent. Vienna has Bourbon force looming forcing Baden to move to the Austrian Capital (the capture of which can lead to Bourbon auto-victory). Early in year the Duke attempted to by pass fortified lines at Namur but failed. French besieged and took Linz and Almeida in Portugal (now declared for Allies). Duke again moved on Namur full of vim and vigour and this time managed to bypass lines. The French decided to fight and at last I felt glory would be mine ! but first warning was French play of a Command Dispute Card cutting the leadership benefit of the duke and Overkirk by 2 this left 10 French dice versus 11 Allied (a narrow margin) and damn it all the French inflicted 3 hits to a mere 1 by Dukes army ! An ignominious retreat by the Duke once again with a Demoralized army......................
Lord Galway then took up the gauntlet moving on Antwerp which was garrisoned by a full strength Spainish Corps. Thankfully he managed to reduce the 2 strength Vauban fortress and evict its garrison before years end gaining 2VP (sadly this merely off-set the Bourbon VP gains elsewhere). France had launched the Toulon fleet again but this year fickle fate saw it wrecked and control of Med stayed with Allies (as is only right and proper). This allowed Allies to roll for Hapsburg Spainish Uprising event but did not occur.
Both sides took niggling losses in the sieges of the year and spent several actions restoring Corps or Transferring reserves.
End of year sees Allies massing in Flanders despite Dukes inglorious actions but with Bourbons strong in Spain and threatening Vienna.

Really loving this game, simple without being simplistic, full of incident and flavour with lots of decisions of caution vis risk and strategy for both players.

Brian Dodge left a comment for Eric Walters
"Hi Eric. Thank you for the warm welcome. I am sure I will be able to find some great groups to join."
19 hours ago

Eric Walters left a comment for John Kane
"Welcome to the CONSIMWORLD Social Website, John!  I hope you find some groups that you like…"
20 hours ago

Eric Walters left a comment for Thom Hall
"Thom, welcome to the CONSIMWORLD Social Website.  Yeah, I have that same problem with listing…"
20 hours ago

Eric Walters left a comment for James Boyd
"James, welcome to the CONSIMWORLD Social Website!  Stonewall's Sword is sure a cool game;…"
20 hours ago