No Retreat The Russian Front another go 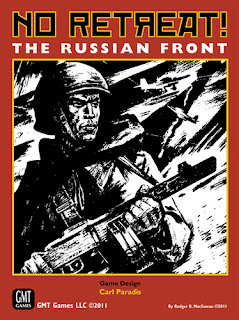 Played another game of this excellent board Wargame at my Dads last night.
Campaign scenario (must try some if the others) with Dad as Herr Hitler once more and yours truly as Uncle Joe Stalin.
Super game with Nazis taking Leningrad but failing elsewhere.
Two Panzer armies were surrounded near Vorenzeh and captured after narrowly failing to break out and this dented Hun ambitions a good deal.
However a large Ivan counter offensive just west of Moscow failed miserably with loss of four armies to one German thankfully the Reds able to restore losses next turn. Game ended in Soviet sudden death victory on turn 12 (early 1943) due to retaking of 6 cities.
We had couple of rules wobbles (biggest was my placing 5 counterblows in one turn but neglecting to discard cards of which I think I had only 4 or 4, we done it every other turn ok !!).
Germans came close to sudden death win in turn 9 but a staunch defense at Stalino and Kharkov thwarted them.

Only couple of pics as too engrossed in action 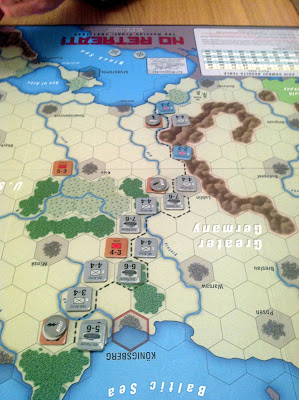 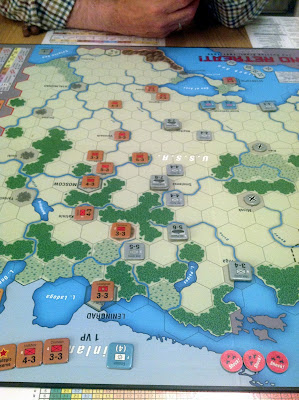 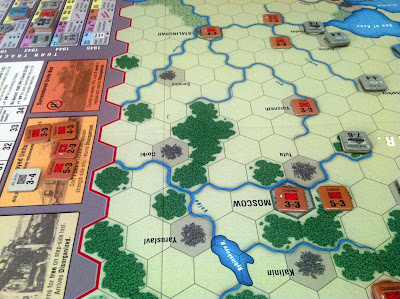 I think you have nailed it as to why the GMT version is better.

Comment by Gary Barr on October 3, 2012 at 3:59pm
No idea what the VPG version is like but the GMT deluxe has very nice mounted board and nice big and thick counters plus decent cards and play aids

It does look good, so I may have to put it on WISH LIST, but I think I may opt for the GMT version over the VPG version.

Comment by Gary Barr on October 3, 2012 at 1:09pm
I find NR to be an excellent game a nice balance of playability and historical context/flavour
Certainly it's not a monster type game as it has less than 100 counters in total but it's a different design concept and game experience. I think of it as a successor to the old favourite Russian Campaign by Avalon Hill but with newer concepts such as cards and separate CRTs.
It scratches a different itch than the OCS type games

How have you found this game to play. I have heard good reviews of it, but some find it very much on an "operational level" (I think that is the correct term) and chose to rubbish it a little, but I feel these are the sort of players who like big maps, thousands of counters and lots of detail

Through my superb dice rolls :-)

Well that and one good counterblow placement by German and a card which forced me to re-roll my one good roll !

How come you lost so much in your Russian offensive?