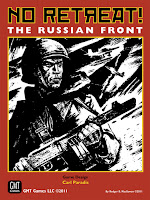 Finished my online Vassal game with Daniel last night ending in abject and total defeat for my Germans.
Disastrous run of Exchange results over several turns saw the Whermacht bled white throughout 1942 and into 1943 with result that when initiative shifted to Soviets on Turn 12 (ie March-April 1943) they had well exceeded the auto-victory level required.
Tough for Germans if they take such losses as too expensive to restore units and very hard to trade real estate for time as recapture of cities simply increases Russian VP levels.
I guess the title of game says it all with Hitler style hold fast orders being the only real option.
Both myself and Daniel had not progressed this far in a game before so interesting to see how it played out when Ivans start churning out upgraded units and Huns get thin on the ground.
Great fun as always with this very playable game (works well in real time on Vassal as game can be saved between sessions but dont think its really viable via Pbem as too many interrupt type cards for both sides).

Same screenshot from within Vassal 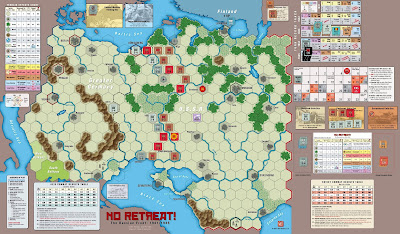