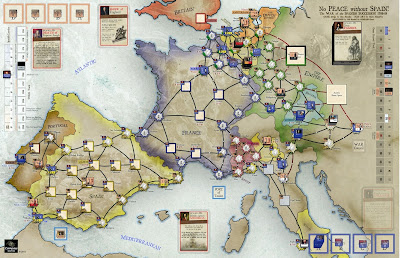 Just finished 1708 turn of my ongoing Vassal game with Norman of No Peace Without Spain. Year started with events phase seeing me pull the 'Minorca Falls' card which gives Allied fleet in the Med a +1 roll making things risky for French to launch their Toulon fleet. French draw was 'Death Of Emperor Joseph' which increases chance of successful peace negotiations by +1 making it more likely for Britain to withdraw from the war in 1710. Both sides then replenished troops and re-distributed Leader for the years campaigning. Bourbon now have overall initiative and so went first this year.

In Austrian theatre French moved on Salzburg and a close battle was fought (7 vs 7 dice) when Eugene intercepted. Eugene came out victorious and Bourbon limped back from whence them came. Eugene later done same to another Bourbon incursion at Linz narrowly winning 3 hits to 2 hits and forcing Bourbons back from approaches to Vienna. Things pretty much stalemated in Austria after that.
In Iberian Peninsula Bourbons having ousted Allies from Portugal began to wear down the isolated Portugese forces.  An Allied army moved around the area capturing a couple of unfortified spaces. At years end Bourbons narrowly failed to capture Elvas and thereby destroy the Portugese (one half Corps remains).

In Flanders I tried to draw out and damage the massive (14 dice) French force by moving Galway and his Army to Lille. Villars intercepted with his 14 dice vs the Galways 7 (I hope to at least cause some damage to his force). However things turned out badly for brave Galway as his troops took 5 hits and lost a Corps inflicting only 2 on the French horde. This meant the first Famous Victoryof game to French. I then hurled Duke and his army at Bouchain again drawing the attention of Villars army. This battle had 14 French dice vs 12 Allied but the bloody Duke reverted to his ineffectual self losing 5 hits to 4 hits and limping backwards. Restoring damaged and demoralized Corps name of game for both sides after that.

Despite the numerous Battles neither side lost a 'named' Commander something which strangely has not occurred yet !!
Duke not performing is really hurting Allied cause and route to Paris barred firmly by Villars. Allies need a big success in 1709 before British Withdrawl occurs as Austria and others not tough enough on there own I fear.
Some exciting battles this turn with Eugene and Villars showing their mettle but Duke failing yet again.

Opening moves of the year

End of year in Austria 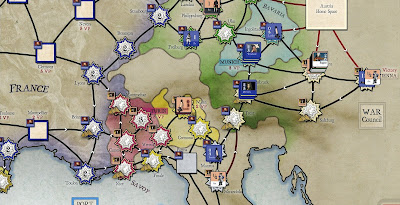 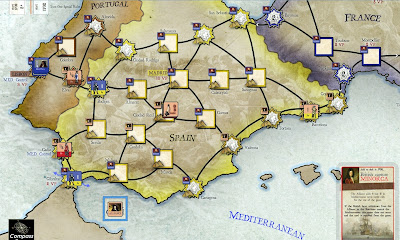