No Peace Without Spain 1709 turn ends 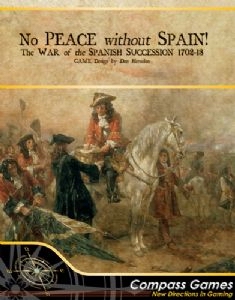 Another year of this engrossing game on Vassal between Norman and myself is completed.
Year of to rather a nasty start with draw of Famine event meaning we are both reduced to 4 instead of 5 action cards this turn. I drew 4 x 2 actions.
Fairly uneventful year compared to previous with the curtailed Campaigning season.
Bourbons being in strong position mainly beefed up their army Corps.
Only in Spain did they manouvre with an army moving to Madrid to thwart my plans there.
For my part (ie Allies) I too restored a few Corps.
I did lay siege to Ostend with Galway managing to bypass Fortified Lines.
I also moved to besiege Naples which turned out rather risky as the Army involved had no line of communication to home so suffered a -2 siege modifier !
Of course Galway failed at Ostend whilst Naples fell to besiegers gaining me 2VPs hurrah !
1710 turn about to begin and first year that Peace Negotiations between Britain and France can occur at year end so will be interesting to see how this transpires.
Overall situation at end of 1709 (no real change except the fall of Naples to Allies) 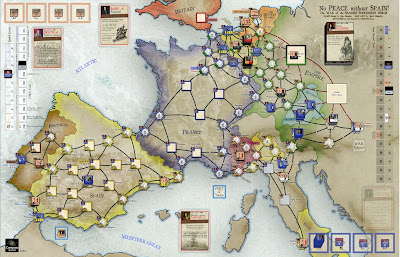 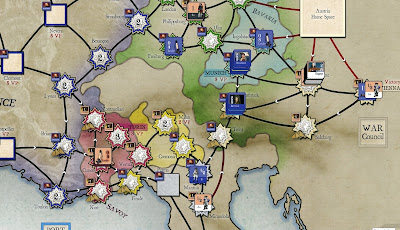 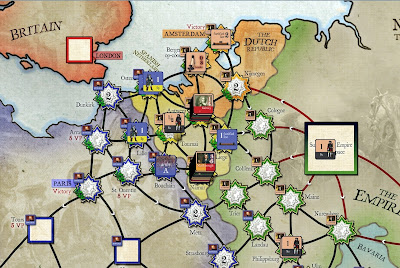 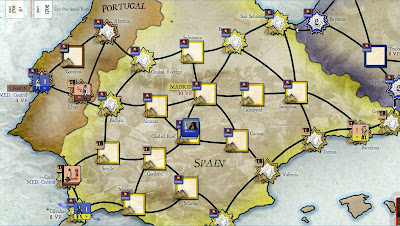