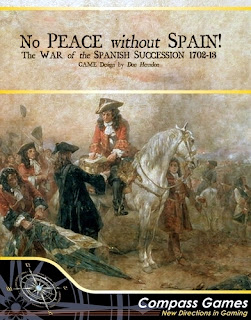 Another year of my Vassal game with Norman has been completed.
Further year of mixed fortunes for Allies.
Year started with Commisard Rebellion event which allowed me to force Berwick to be withdrawn deal with it (he comes back in 1708 with a fresh corps in tow).
Bourbons drew Altranstadt (Great Northern War) event which removed a Subsidy Corps from my OOB until 1708.
Both sides then recieved reserves and built-up depleted Corps. Bourbon did not launch their Med fleet this year (must have run out of wood or sailors).
Eugene in Austria moved on Inglostadt laying siege to it but retired when a larger French force lead by the able Villars approached and spent the rest of campaigning season at Linz.
The newly raised Savoy Corps also invested Milan which fell to them gaining me 2VPs (much needed). However elsewhere in this theatre Stahremburg was brought to battle and defeated languishing bruised and battered (first full corps of game lost in this battle) at Mirandola in Italy.
French laid siege to Trent which fell to them at years end (-1VP).
In Flanders the Duke advanced yet again on Namur managing to bypass the Fortified Lines. A nearby French force tried to intercept but failed.
The Duke then duly took Namur by force (+2 VP) at last repaying faith put in him by all and sundry (ie me !!).
This saw Bourbons transferring several Corps and a large army into the region most likely to force a show-down in 1708.
No campaigning in Spain at all this year staus quo being maintained.
So a small gain in VPs but some losses sustained and a large build-up of French strength in Flanders and Austria not boding too well for any future gains.
Such an engrossing game this.

End of year in Flanders 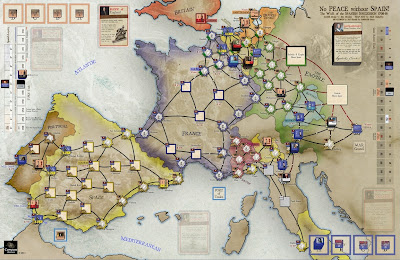 Comment by Gary Barr on May 19, 2012 at 6:40pm
Hi
Yes Alliance side has a tough task but Marlborough has not performed well so far and Alliance relies heavily on his abilities to bypass lines , conduct sieges quickly and to win battles all of which he has been poor at in my game so far. But still a good game and a great deal of fun

As for the alliance side, the severer situation continues.

However, I seem to improve for the better if I exceed a "Non Plus Ultra".