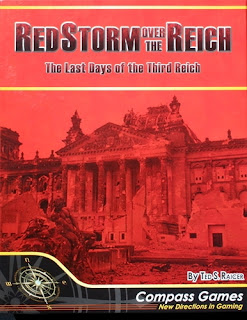 Had a solo play through of Red Storm Over The Reich today (see earlier entry re Set-up with Pics and Video). First turn inevitably slow as I referred to rules. Not a complex game by any means in terms of systems used and the various Game Charts etc make things fairly straightforward. Lots and lots of opportunities for both sides to move in the game governed mainly by a movement 'matrix/level' generated by dice rolls with differing vales for Soviets and Germans and for Infantry vis Mechanized types (some units have set moves or limited opportunities). Different to play a game wherein Soviets have initiative from the get go. They get to initiate Move and Assault (with some limited German mechanized Reaction) phase first then get a Breakthrough phase before the German Move and Assault phase and then also get first dibs in the Exploitation phase (during which Overrun attacks can occur) and the finally go first in the Redeployment phase. Only as I played through first turn did I realise the extent of the dangerous posistion this puts the Huns in ! Their line is held mainly by Infantry Divisions (who if stacked alone cannot initiate attacks) and who die in droves although there is a nice KampfGruppe rule where on a certain result the 'dead' Inf leaves a KG/Cadre (a similar KG rule for Mech units) behind instead of being removed totally meaning potentially more delay to Soviet steamroller. The caveat is that these results are not certain on CRT and KG cannot be formed if unit is Out Of Supply. And this I soon learned is how the Soviets gain upper hand very quickly as any initial breakthrough soon becomes as series of nasty cauldrons of surrounded German units. Now the 'cauldron' units can still move, indeed ignoring ZOCs, but at half move allowance in limited direction (basically the 3 'rear' hex sides) and cannot end up adjacent to Soviet unit. If still OOS in the Attrition phase at turns end they lose a step which is often enough for ant damaged unit even the vaunted Panzer Divisions. The Germans do get a load of reserves and some re-placement points but they are generally low combat values and start on board edges or in towns/cities.


In my game I played two full turns which are in Frost conditions meaning Soviets are at their best for movement (in particular crossing rivers and lakes) and get full air support, the next two turns are in Mud which slows things down and ground the Soviet air force (mind you Huns only get one air 'barrage' counter but they do get Herr Rudel if only for one turn). The Red Army simply blew a massive whole in German centre that they would struggle to plug in any meaningful fashion as far as I can tell. The few surviving German units in the centre where relentlessly surrounded and immolated in turn. The German did have a small hedgehog in the South around the Silesian factories but this was under threat. They did do better further North in East Prussia where terrain is denser being pushed back but maintaining a more cohesive line of defence. A few other features in game with counter representing German surface ships Prinz Eugen and Admiral Scheer in Baltic (they can bombard like artillery) and counter for Refugee columns whose passage to safety aids German VPs. Germans are also hampered by Fuel Shortages wherein the Ivans can place 6 maximum markers on German mech units cutting their potential moves on half. Ther German get 2 Fuel Supply counters (if unit adjacent they cannot take or lose Fuel Shortage marker)From turn 2 onward German have to roll to see if Hitler demand attacks and whose failure to undertake costs VPs. One can see just how futile such attacks were with such weak German units in the face of Red Army might.
I called time mid way through turn 3 as I could see no real hope for Germans (hindsight reveals that they must pull back PDQ to try to preserve some units to shore up a defence line in the Mud turns). Next turn the Ivans would also cross the 'Soviet Supply Limit' line which for 3 turns cramps their style a tad but I still felt too much damage done to Hun cause.


I enjoyed this game and will give it another outing as it had a good 'feel' to it generating a real sense of the  Germans at this stage of the war of simply having too little too late and often in wrong place.
Germans will not push Red Army back into Russia but must hold out better than they did historically to gain a victory.

Soviet Juggernaut in action with the light reflection pretty much mirroring their main attack axis in centre (and note the sudden lack of German units here !) 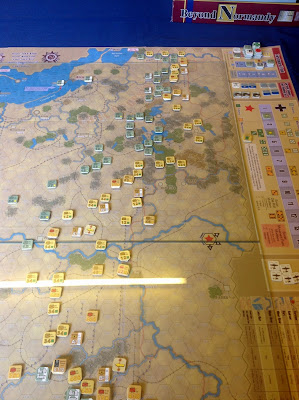 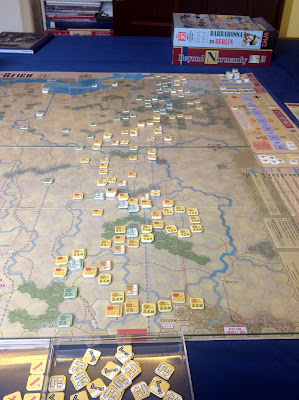 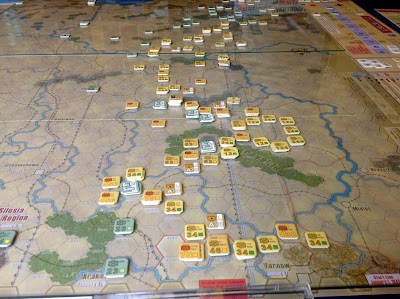 Northern sector around East Prussia where some Germans remain 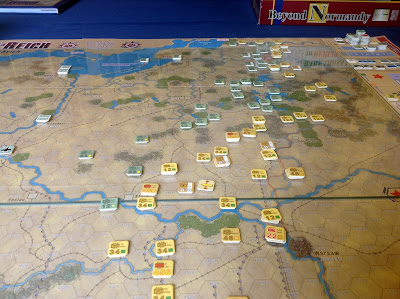 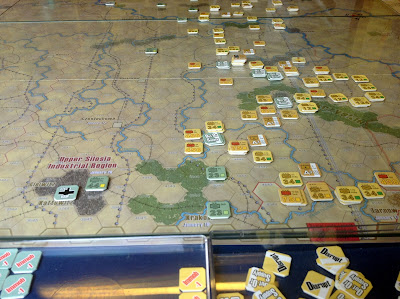 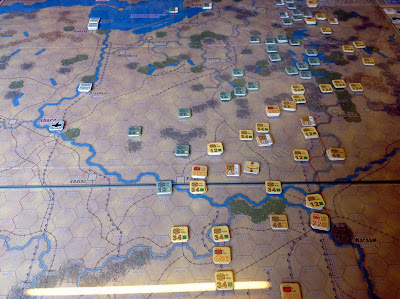 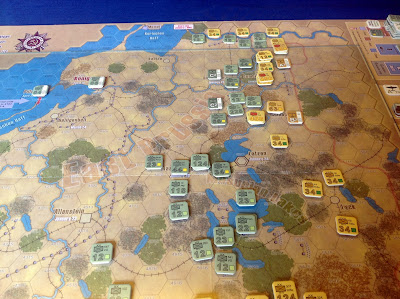 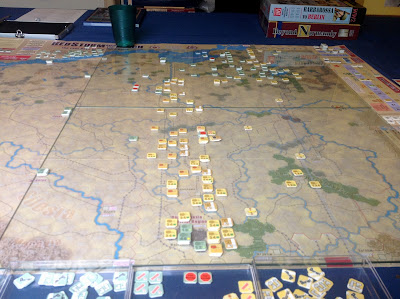 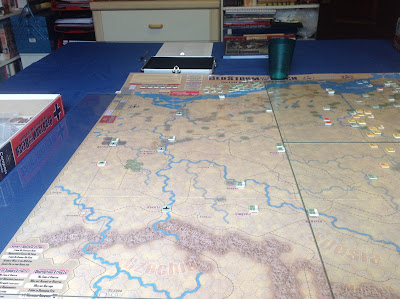 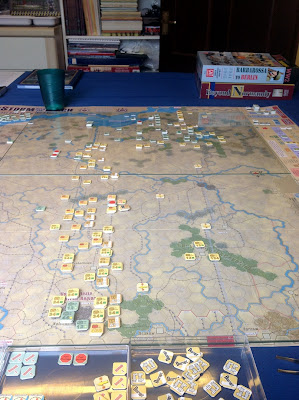 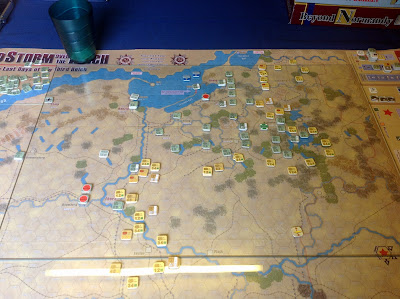 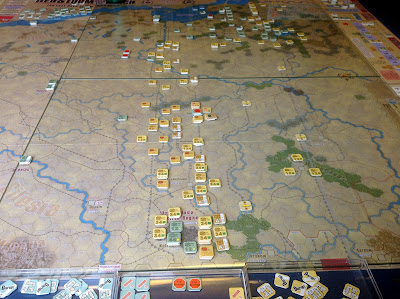 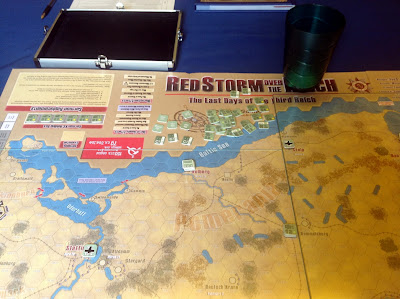 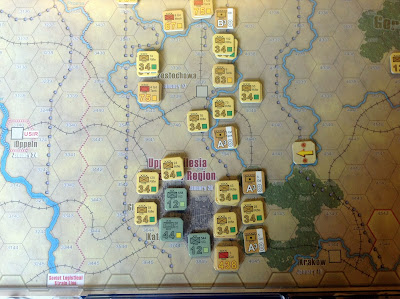 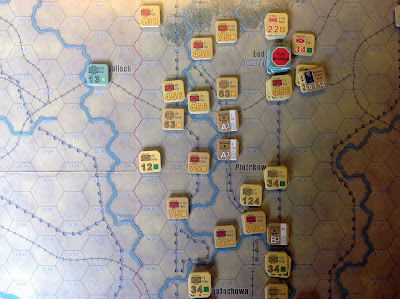 Where are the waffles? I'm hungry.

I have played this game about one week ago.

It is a very good game!