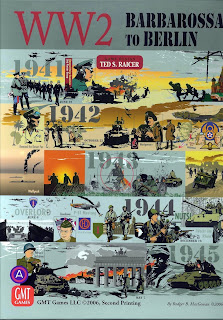 Played another game of WW2 Barbarossa To Berlin with my Dad last evening and we managed to play the game to completion (ie Allied automatic victory in late 1943). Both really like this game (am hoping Paths Of Glory will be similarly enjoyable) as lots of options with varied cards and events.
Dad tried the 'Paulus Pause' opening card in lieu of the 'Barbarossa' card which lessens impact of his assault on Russia (ie no plus DRMs) but conversely lessens impact of the first Soviet Winter (voids Supply limits and retains Mechanized status for his Panzers).
Therefore he only managed a thrust in Northern Russia, taking Leningrad and arriving at gates of Moscow.
I relentlessly bolstered this front whilst we both stalemated in central and southern Russia in the main.
Partizans caused some grief to German supply.
The battle for Moscow turned into a epic with losses to Russians being severe but they managed to hold on with steady stream of reserves.
In North Africa the Axis fared poorly and with my use of 'Torch Landings' to their rear they soon were run out of North Africa altogether.
I was then able to launch invasions of Sicily/Italy and more importantly used 'Round Up' invasion to steal into Norway taking Iron Ore site from Axis control.
'Casablanca Conference' card brought neutral Turkey and Sweden into Allied sphere of influence (and more importantly garnered 4VP locations) this steady drain of VP locations and lack of progress on East Front (despite a successful foray to take Sevastapol) saw Axis being forced to take at least 1 VP location  or lose the game (if VP total brought down to zero its an Auto allied win).
My Dad made couple of key mistakes at this juncture in failing to spot an open VP location to east of Sevastapol and trying to re-take Bergen when Stockholm was much easier or even a raid into Turkey.
Allies held on to achieve the auto victory HUZZA !!!
Great game again and we are both discussing future alternate strategies for another game.
US entry to war was bit later than in our last game but definately more decisive with the Torch landing yielding much better results than an easily contained version at Calais.
Invading Norway and taking a VP and the Iron Ore space fixated the Axis on this location to their detriment.
The card play system yields so many options per turn/phase/card and therefore much variety.
One just cant do everything one wants each turn and some hard decisions on card usage and indeed whether to hold or play (especially those cards whose events need to be played to allow future events to occur).
I used an upgraded map board (a thinish cardboard type) I obtained that has several enhancements on the map compared to standard paper map. 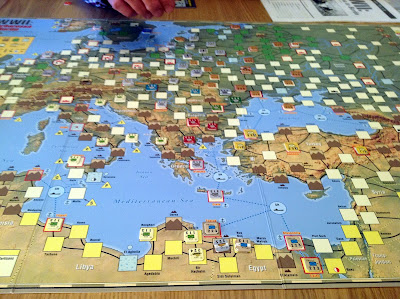 German breaking through in north 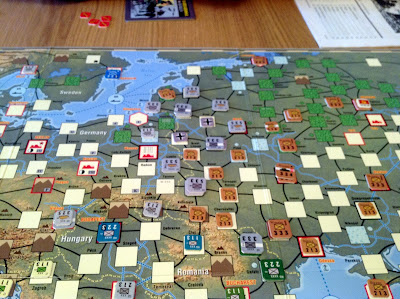 Set up in North Africa 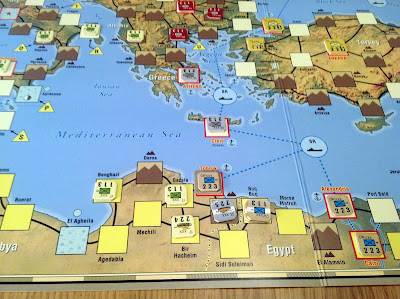 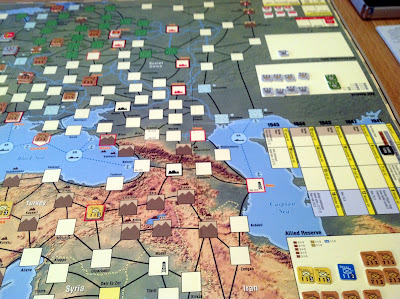 Mid-game with onslaught starting at Moscow 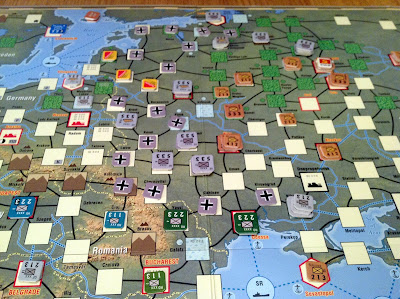 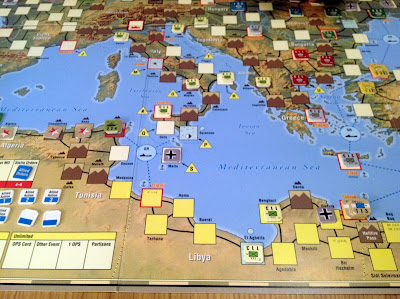 End game in Russia with Germans pulling back as Russian Tank Armies appear at Moscow.
Sevastapol in German hands 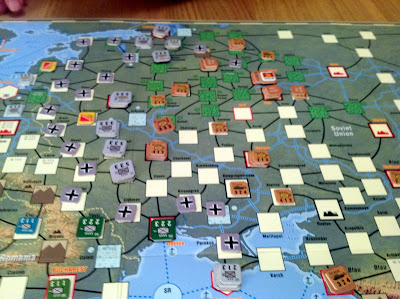 US have taken Sicily and now crawling up Italian 'Boot' 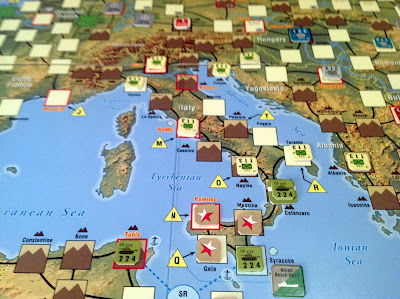 British in Norway giving Axis a third front to worry about 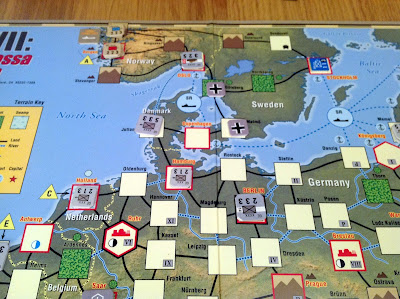 I have this game but have not yet played it. PoG is great so I'm sure this one will be very good also.

That was great fun to read. Thanks for sharing with us. Lucky you getting to share an interesting with your Father.

I hope you enjoy PoG once you get around to it. I have played both and enjoyed each and think that the two games have a different "feel" despite the similar mechanics. Have fun.