WW2 Barbarossa To Berlin another game ! 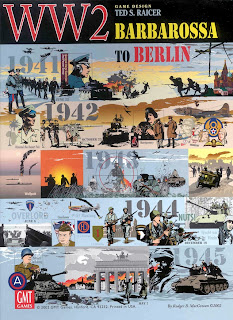 Had another excellent session with this game last night with my Dad.
Played out very differently to or last game and if anything even more enjoyable than last outing !
Dad used 'Barbarossa' ploy this time (he only ever plays the dread Hun in any game we play) and lack of decent cards in my hand saw the Offensive make some big gains this time.
He subsequently played the 'Taifun' card (Op Typhoon) and after a sharp battle managed to take Moscow.
I erred in this game not realising the consequences of losing the Stalin counter (should have redeployed).
Russian RPs at minus one for duration and more importantly inability to SR with Large units (so unable to re-build and re-deploy destroyed Russian Fronts ie LCUs from Reserve box !!). I think my Dad then erred slightly by not trying to destroy as many Russian LCU Infantry as possible as this would thwart my upgrading them to Mechanized Fronts later in game.
However I managed to take North Africa easily this time and was able to open a second front in Early 1942 at Calais (a German LCU really needs to occupy this area) using 'Round-Up@ invasion and opened up a supply port at Antwerp (playing 'Clearing the Scheldt' card).
Early 'FDR Declares War' and 'US Build UP' appearance meant I was able to get several US/Brit unit into western France before Germans could effectively re-deploy.
Dad tried manfully to re-take Antwerp but I won battle of build-up and he wisely retired behind the Rhine. In the East he also pulled back as my Tank Fronts appeared and kept him occupied (although Ivan offensives were pretty ineffective as I rolled a lot of 1's and 2's).
Meanwhile I conducted 'Op Husky' and entered Sicily and Italy and then played 'Italy Defeated' card to knock El Ducebags lot out of war.
Dad occupied Rome for a short while with German Panzers but these were soon chased north by my British and US Armies.
We had to end game in the Fall 1944 turn (as I was about to turn into a pumpkin) with Allies having gained a foothold across on Rhine and trying to cut0off large German forces around the Ruhr.
Southern Germany was also looking very open.
In East the Russians were gearing up (now with 9 Tank Fronts in play) for big push. However no forgone conclusions in this game as Dad earlier play of 'Totaller Krieg' card when he was sitting on 11VPs gave him a +20VP boost  ie up to 31VP, which I had only whittled down to 7VPs when we called time.
Tough task to take the required VPs in Germany as Hun still very strong on ground so may have had to target Axis allies Romania and Hungary.
So many decisions and options in this game.
Great stuff again.
Hitler ponders opening moves 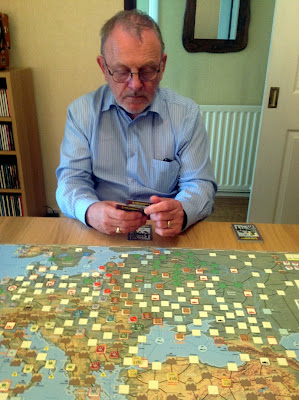 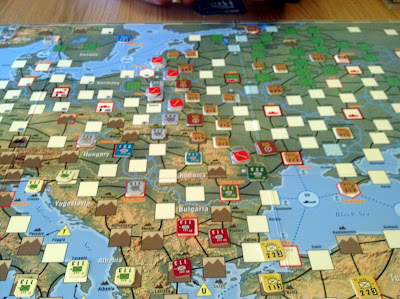 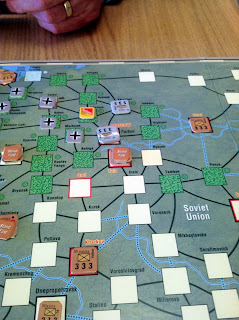 Odessa falls but limit of German advance in north 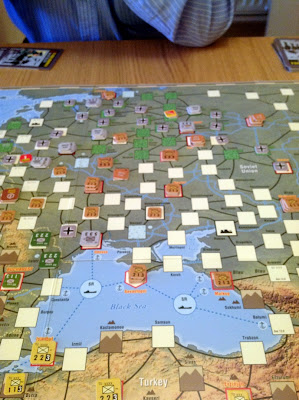 Panzer Armee Afrika dealt with, and Italians in sights 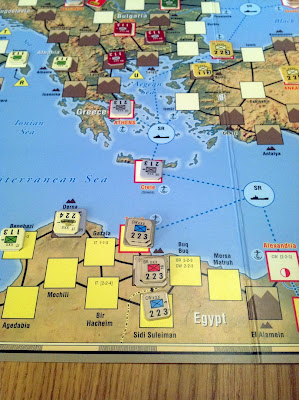 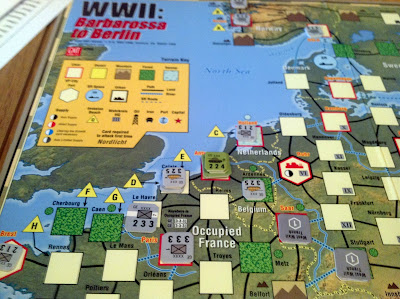 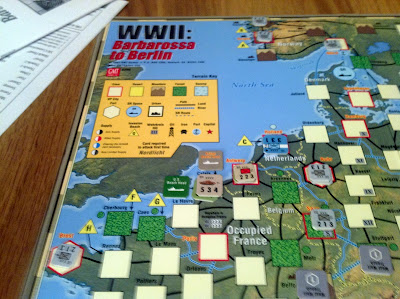 Meanwhile in East the Germans retire to Reich borders 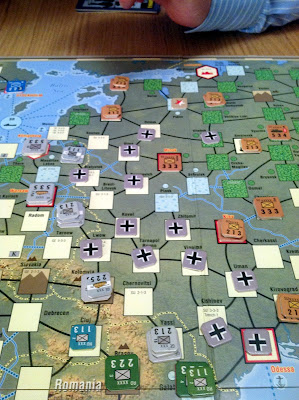 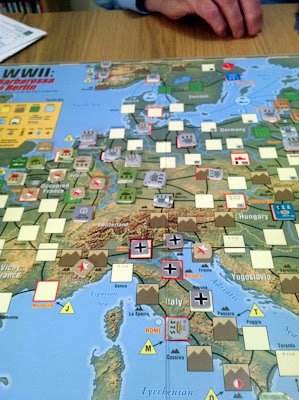 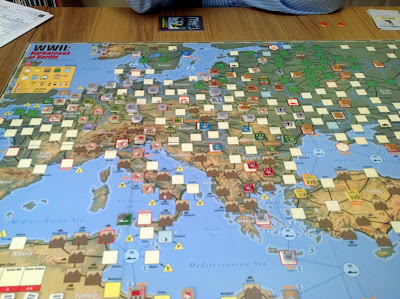 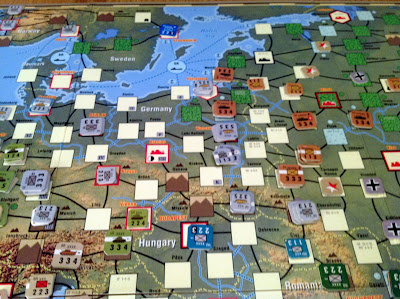 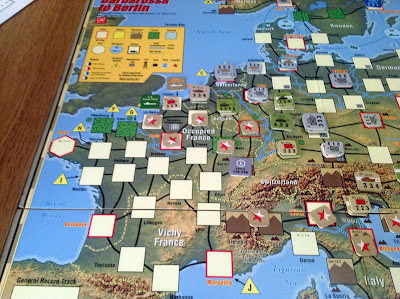